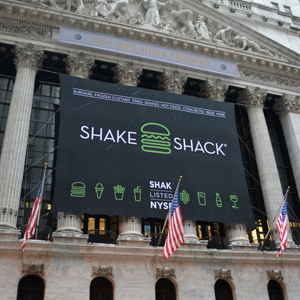 At Jacob Tyler, we draw design inspiration from the world around us. We create functional and intuitive designs that accurately portray the brand they represent. In order to achieve this end, we immerse ourselves in the culture of an organization to ensure we can “feel” the brand as well as we can see it. A great design is inspired by culture, product and when applicable – physical surroundings. Shake Shack – the high-end burger chain that recently launched a $1.6 billion IPO – is a great example of what could be called “indigenous” branding. Created by world-renowned designer Paula Scher, Shake Shack’s branding was meant to mimic its original physical location and construction. Built in Madison Square Park as a part of the park’s conservancy, the structure of the original Shake Shack was constructed with corrugated metal to blend in with its surroundings – an urban park landscape. Drawing inspiration from both the structure and the core of Shake Shack’s offerings – a 1950’-inspired burger joint – Scher created a simple, flat design that conveyed both past (“neon” 50’s roots) and present (neo-urban landscape).

Shake Shack’s branding was not conceived to represent an international chain restaurant, only a one-off location. But the restaurant’s immediate popularity gave way to a meteoric expansion that now includes locations in Russia, Dubai and even Turkey. And the original brand design survived – and thrived. It’s a great example of indigenous branding. While Shake Shack is now a multi-national corporation, it’s appeal remains grounded in its original offerings and that first location in New York. Your brand represents your company’s core – it’s culture, it’s products and its way of doing business. Success doesn’t change brands – it strengthens them.

To read more about Shake Shack’s brand story, check out this article from Fast Company: http://www.fastcodesign.com/3041777/the-untold-story-of-shake-shacks-16-billion-branding?utm_source=mailchimp&utm_medium=email&utm_campaign=codesign-daily&position=1&partner=newsletter&campaign_date=02022015#1

To learn more about how Jacob Tyler can help with your branding needs, fill out the form to the right.