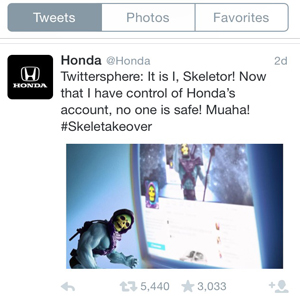 The holidays have come and gone but we thought we’d revisit a campaign that had amazing reach! Everywhere you turn during the holidays, you’re inundated by advertisements for everything from vacuum cleaners to vacation homes. The message is the same: “Product X would make a GREAT holiday gift!” The competition for eyeballs – across digital, social media, TV, radio, print, and more – is intense. To stand out, advertisers not only have to get really creative, but also have to focus on specific market segments in order to get the most bang for the advertising buck.

Honda’s latest campaign is a great example of marketing towards a specific demographic – children of the 1980s. Now 30-something adults, this demographic is a prime target audience for Honda’s vehicles. The ads, featuring popular 80s toys headlined by “Skeletor” – the villain from the He-Man toys and cartoon series –summons the ghost of Christmas past. Transfer advertising is not a new concept, but rarely has it been so hilariously direct. The toys literally tell you to associate your good feelings about the 80’s with 2015 Honda vehicles. Skeletor, speaking from inside a Honda CRV, turns to the camera to say: “Remember the exultation you felt when you got me for the holidays? Feel that again with new CRV during happy Honda days!”

More 80’s toys – including Strawberry Shortcake, G.I. Joe, Jem, Stretch Armstrong and even Gumby – appear in subsequent spots, all espousing the same message: buying a Honda will make you feel like a kid during the holidays. The spots are well executed, well written and truly funny – they also garnered a great response, prompting Honda’s social media team to expand the campaign to Twitter, where “Skeletor” staged a brief coup on Honda’s account. The self-proclaimed “Master of the Universe” proceeded to troll a slew of big brands – including Olive Garden, People Magazine, Charmin and Sephora – as only a 1980’s evil cartoon mastermind could. The #Skeletakeover, as it was dubbed, is a great example of cross-platform advertising in the digital age. 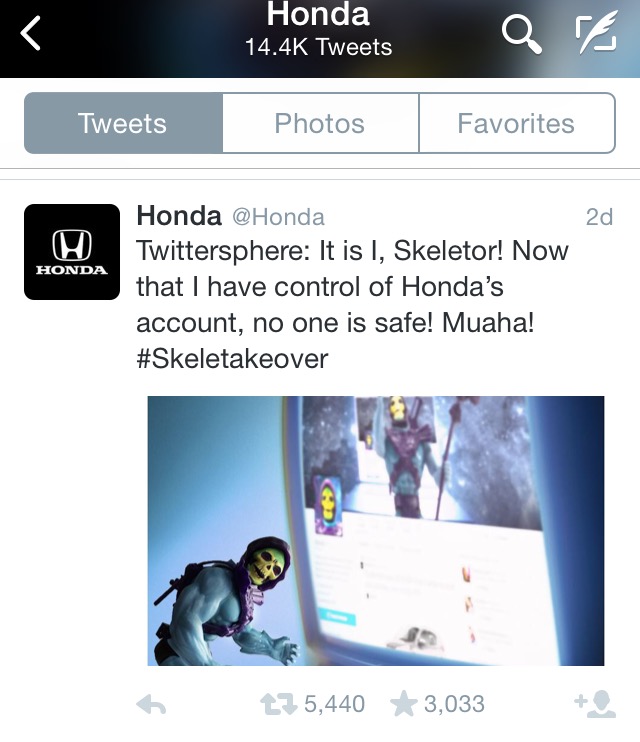